Dreadful music blasting, Millions of Milkshakes is long on gimmick and self-promotion and terribly short on results. With videos of the d-list celebs who have popped by to lend their name to an overhyped concept, The Monster gets a Miley Cyrus (cookie dough and Reeses Peanut Butter Cup) and has to pause when they ask if they should put whip cream on top of Miley.  He ultimately says yes but feels filthy for it.

That is the highlight of Millions of Milkshakes.  Because the shake itself sits half eaten, a waste of $5.  It’s too thick and tastes like absolute, 100% crap.  If this is what Miley Cyrus tastes like… 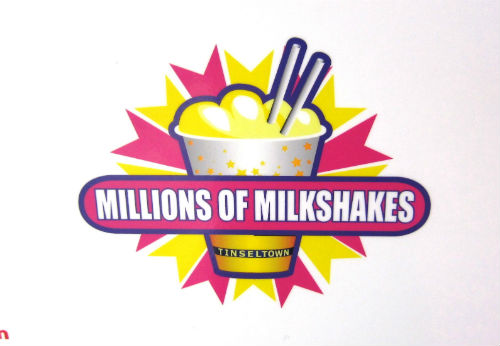 There is nothing going on here you couldn’t do at home.  Or get a better version of at a Million Other Places.  Do that instead.  Let this place implode from its sheer awfulness so we all can feel a little better about ourselves.

Filed under Millions of Milkshakes, Reviews