And so it was with trepidation The Monster approached Taberna Mexicana.  He’d heard about Chef Alex Padilla’s pedigree at Michelin starred restaurants and his familiarity with French and Californian techniques in addition to those on offer at Taberna.  He’d looked at the menu and been impressed by the interesting ingredient pairings and the fact that no lard is used and no rice and beans are immediately on offer.  This didn’t look like El Torito.  And yet, The Monster has had sushi in Ohio, he’s seen men in Speedos, he’s gotten way too close to women with hair in places even men shouldn’t have it.  But the lure of Mexican food was too strong and so The Monster finally broke down and gave the place a shot.

And he’s sure glad he did.  It’s a handsome room with a patio running its length.  Its days as the ill-fated Luau are nowhere to be found.  Instead, one feels less like they are in a Mexican restaurant as in a fine dining but accessible establishment with Mexican influence.  That influence extends beyond in fact Mexico, as the Honduran born, Houston raised Padilla has conjured up a Mexican leaning menu with pan-Latin touches.  If you’re one to argue about authenticity have it, that’s not the point in this cooking.  Instead, it’s market driven, seasonal fare drawing on the wide range of the chef’s abilities.

Immediately on offer are plantain, yucca and blue corn tortilla chips with green and red salsa.  The inclusion of the plantain and yucca chips is the first clue this place aspires to more than one might previously have given it credit for.  The chips range from exceedingly thin to quite plump which makes getting into the salsa a tad more difficult.  But they are also freshly prepared and the salsas on offer are nice compliments to the chips.  Promising start.

The menu is packed with choices that screamed out to The Monster.  Guacamole with pumpkin seeds and queso fresco is an obvious order.  So to is the tortilla soup with a blend of pasilla chile, fresh corn, poblano peppers, tomatoes and Oaxaca cheese.  Then there is the crispy duck tacos with jalapeño and morita sauce.  For dessert, how about some traditional flan with Kahlua, caramel sauce and whipped cream.

That means The Monster is skipping such wonderful sounding items as the poached octopus with roasted jalapeño, caper aioli and garlic chips; the sea scallop ceviche with fresh passion fruit and truffle salt; the roasted rabbit in green mole enchiladas; the chicken tamal in guajillo pepper sauce.

When the soup comes it’s deep color, it’s hearty thickness and it’s wonderful aroma portend of a winner.  It’s rich and spicy. Delicious.  It’s taken a passé soup and made it new again.  The guacamole is fresh and smooth.  The toasted pumpkin seeds and large chunks of tomato combined with the yucca and plantain chips again show the multiplicity of influence at work here. 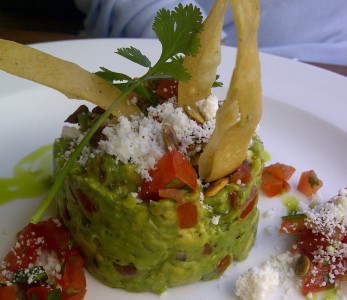 The duck tacos are a ridiculously beautiful offering of duck with simmered onions underneath.  Wrapped in a tortilla with a smattering of the sauce and it’s wonderfully decadent lunch.  That there is also a duck leg only taunts The Monster when he can’t finish it.  Only the tortillas disappoint.  While homemade, they are the weak link in an otherwise special dish. 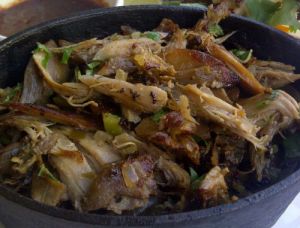 Just to make sure The Monster isn’t crazy he checks in with his dining companion who is equally as smitten with the food.  While completely stuffed, The Monster attempts to finish every last bite.  In a rare display, The Monster is bested by the food and some of the duck will be taken home and eaten for breakfast tomorrow.

The flan is thick and rich with the caramel flavor coming front and center.  Not normally a flan fan, this one might convert The Monster.

Perhaps because expectations going in were so low, The Monster must reevalute his thinking on Mexican(esque) food in Beverly Hills.  Especially with the siren call of margaritas and tequila taunting The Monster from the bar a trip to Taberna Mexicana for dinner is in order.

Why go?  You not only wear Speedos, you have hair in all the wrong places.