When you open a new restaurant and you’re looking to establish yourself the very first item of business absolutely should be to buy horribly uncomfortable metal chairs.  It sets an insta-mood of “patrons, do not dare come here, this is not a comfortable place to eat and relax.”  Such is the case with Barlo, the new addition to the Erwin Hotel in the erstwhile Hash space.  Did anyone from the restaurant sit in these monstrosities?  Did anyone in the hotel give them a go? Has anyone in the world sat in these pathetic attempts at chairs?  The only thing more uncomfortable than the chairs would be if they added arm and leg straps and had electricity coursing through them.

Which is a shame because The Monster took a sneak peak at Barlo and while it’s still in its infancy and dishes are hit or miss, it does strike one as another potential spot in this burgeoning corner of Venice (Larry’s, Venice Ale House, the soon to be open Dry Tour).

When The Monster visits it’s fairly empty on the inside and there is a table or two occupying the outside.  Having sat outside before, it’s a space that one’s tolerance for will depend on how much you like exhaust fumes and lame tourists.

While sitting inside The Monster is assaulted by some damnable rap music that luckily gives way to much better reggae as he peruses the menu.  It’s an eclectic menu of Southern inspired small plates.  The space itself is playful, a long communal table down the center with individual tables along the back.

Here’s what is ordered:

A bit limp but tasty and loaded with parmesan.  Points earned for offering ketchup and mustard.  Points redacted for the hotel room mini Heinz Dijon.

Served in a hard shell.  Does it work?  The taste is there but with the taco shells breaking most of the dish ends up being eaten with a fork.

Light on flavor where The Monster wanted the tomatoes to pop.  Wish more of the diced red tomato accompaniment is included.

Nicely fried and served with the piquant red peppers which is always a bonus as their vibrancy counterpoints the more mild fried calamari.  The remoulade is decent enough though it gets lost in the mix.

Three plump, perfectly grilled shrimp and delicious Anson Mills grits.  This dish brings The Monster back to days in the South. 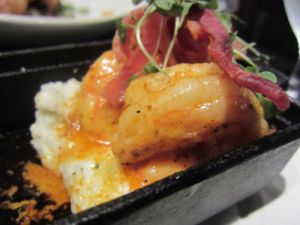 If you don’t make killer fried chicken don’t offer it.  Barlo’s is not killer.  Not even close.  The fried batter isn’t crunchy enough nor does it deliver enough flavor, the chicken beneath is moist but also fatty.  Farmshop in the past couple weeks to this is like listening to Pavaratti live then hearing him sung at karaoke night.

Friendly service from this yearling is a plus and it seems a team is in place to do some good things.  With refinement in the menu The Monster hopes it finds more success than its less than spectacular predecessor.

Why go?  It’s this or the electric chair.