It’s a little after 10 pm and The Monster has just finished Zagat restaurant #13 left on his quest to eat at every spot in the Los Angeles guide.  What ended up being a very good meal has left The Monster in a jovial mood.  So with a skip in his step he heads down the street to Zagat restaurant #12, La Cabanita!

In Los Angeles, La Cabanita is known by many names.  The Mexican restaurant in your neighborhood sporting good food, honest prices, friendly service and a convivial atmosphere.  Nothing pretentious, no molecular cuisine or art on a plate.

It’s loud, with festive music , cheesy piñatas hanging from the ceiling and a mural depicting life in Mexico along the wall.  Walk toward the bathroom and the walls are adorned with a shrine of awards lauding La Cabanita for its excellent food and service. 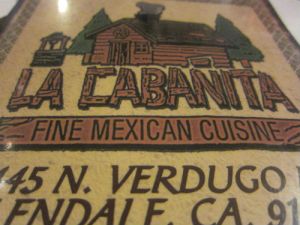 A full meal in The Monster’s stomach be damned, we’re ordering big time.  Chiles a la Cabañita (poblanos stuffed with chicken and raisins) and Pollo con Mole (chicken in their special mole sauce garnished with sesame seeds and served with rice, black beans and two homemade corn tortillas) along with some guacamole and their fresh chips served with two different fresh salsas (one verde, one tomato based).  There is also an order of some creamy blah blah blah dish that The Monster ignores the second he hears it being ordered.

The chips and salsas, along with a special smoky, hot sauce they share with us are all flavorful.  The chips prove fresh, not too greasy and the salsas aren’t watered down the way they often times can be.  Along with a margarita made with fresh fruit, it’s a promising start.

The poblano peppers are fantastic.  A perfect marriage of flavor with a little kick to them.  It’s the kind of dish The Monster imagines being served in a home in Mexico.  Everyone at the table joyfully sticks their forks onto the plate to enjoy.

Perhaps the only letdown is the chicken mole.  For The Monster, the mole doesn’t quite taste complex enough.  Not enough chocolate with hints of nuttiness and smokiness that make this difficult dish so revered.  With that qualification in mind, the plate is licked clean.

As The Monster snaps away on the camera our friendly server asks why one is taking photos of every conceivable corner of the restaurant.  Regaling the server with the story of The Monster’s quest brings both pride and a tinge of sadness.  A fourteen year journey is near complete.  But with that comes the promise of new adventures.

Happily filled after two complete meals at La Cabanita and Bashan, The Monster makes the thirty mile trek back to Santa Monica in record time with few cars on the road.  He happily goes to sleep with anticipation of Zagat meal #11 which is only a few days away.

Why go?  You’re not invited to dinner in Mexico City but still want to experience the great taste accompanied by it.