The Monster had no business eating another meal.  Overeating at one restaurant is a forte, but two meals back to back is merely egregious.  But The Monster couldn’t help himself.  Restaurant #18 on the final drive to eat at every place in the Zagat Guide was five minutes away so off to The Derby he went.

From the moment we pulled up The Monster was smitten.  While not a meat eater, The Monster loves steak houses.  As a child (when The Monster did eat meat) one of Papa Monster’s best friends owned an old school steak house (that’s still around, The Claremont in Columbus, Ohio!) and we would spend many a night there watching Barry the owner (an Original Monster himself) smoke cigars, eat like a champ and regale us with his incredible stories.

Sure enough there were men outside chain smoking and the sign announced The Derby as world famous.  Oft hyperbole, this institution has been around since 1922 and is Seabiscuit jockey George Woolf’s original restaurant.  Replete with gorgeous stain glass windows, old school red banquettes, a treasure trove of horse racing memorabilia, classy burnished wood and enough Tiffany style chandeliers, lamps and candelabras to make an antiques store owner jealous.

A nice sized crowd gathered for a Sunday night, the energy here entirely different than at Restaurant Devon.  With a classy, knowledgeable waitstaff and a beautiful room The Monster tried to forget he’d already eaten his quota for the evening.

Delicious bread starts you off, a hint of garlic and butter with cheese, warmed.  Melts in your mouth  and it was two pieces down before The Monster realized he needed to save room for another meal.   And while it might just be grilled Wonderbread with store bought spread, that bread is fantastic.

With the help of our server we ordered the shrimp cocktail (deemed the best in the city by our waiter), the French onion soup, broccoli au gratin and crab stuffed shrimp.

Five large, plump shrimp arrived in short order.  The cocktail sauce had a nice kick with enough horseradish to let you know it’s there but not so much it becomes obtrusive.  Little bits of diced celery where added to give a nice counterbalance in texture.  Best in the city?  It was damn good. 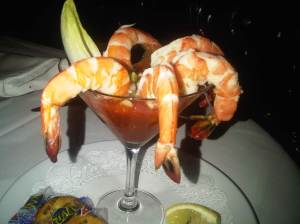 The French onion soup was a marvel to behold.  A beautiful, thick layer of cheese, lots of bread and onion.  Where many French onion soups give you a nice top layer and then watered down broth underneath, this was a meal unto itself.  The only complaint was it was on the salty side.  Didn’t stop The Monster from finishing it all. 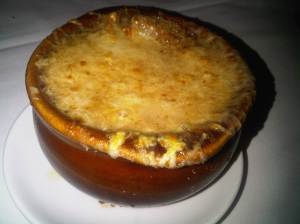 At this point The Monster went into a full blown sweat.  Tired, far from home, only wanting to be asleep, with a body revolting from the amount of food it had ingested, thoughts of taking the rest to go flitted through my mind.

The crab stuffed shrimp were three butterflied beauties with a nice sized layer of crab beneath them.  Though oversauced, they were impossible not to eat.  Steak houses often times prove adept with seafood and The Derby showed its stuff on this evening. 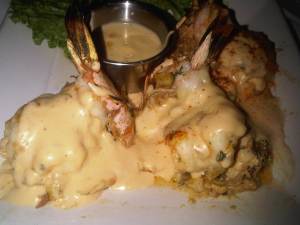 The broccoli au gratin however was disappointing.  Not enough flavor.  How one can make an au gratin dish without enough flavor defies explanation.  While the broccoli was well cooked, the au gratin tasted watered down, not sufficiently browned (perhaps this technique doesn’t work well with broccoli) and lacking in cheese and breadcrumbs.

The Monster meekly held out his credit card before the waiter could offer dessert menus, waving the white flag that he was surrendering.

Once safely ensconced back in Santa Monica it took about two nanoseconds before The Monster was asleep in bed.  Amazingly, he woke up famished and a breakfast of two slices of leftover pizza awaited him.

Why go?  You’ve spent a day at Santa Anita Racetrack and want to pamper yourself with old-school hospitality and food.